This morning we rode from Madison to Cottage Grove where we picked up the start of Glacial Drumlin State Trail.  This trail runs from the outskirts of  Madison to the suburbs of Milwaukee. Two nights ago there were tornados and high winds in the areas near the trail.  All went well riding along beautiful tree covered crushed limestone paths until just over half way when we were blocked by a long series of large trees that fell across the trail.   We managed to get past the first three fallen trees but then we were completely blocked by a wide swath of multiple large downed trees.   We backtracked and rode on US 18 for a few miles until we could get back on the trail.   From the road we could see many downed trees in multiple towns.  Quite the storm! The rest of the trail was paved and the large debris had been cleared.  Later we caught up with a forest service team that was clearing the trail and they said they were headed back to the blocked area. This trail gets a lot of use! 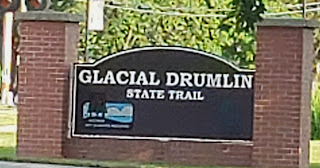 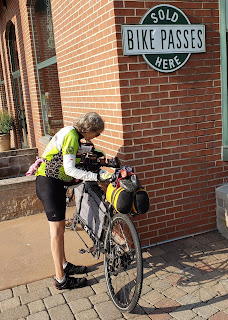 Taking a break on the bridge at Rock Lake (town of Lake Mills).  The two orange floats in the water are attached to swimmers! 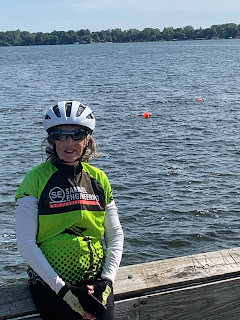 Lots of cool bridges over rivers and lakes along the way 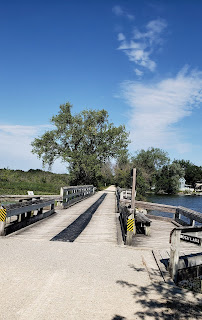 Question: what is a Glacial Drumlin ?