“Everyone has a plan until they get punched in the mouth."  --  Mike Tyson

We are calling this the Portland to Portland adventure.  We actually start west of Portland, Oregon at Fort Stevens State Park.  At Fort Stevens we will dip our wheel in the Pacific Ocean to start the ride!

In general, the routes we reference below are from the Adventure Cycling Association (ACA).  We are riding a mix of Mark's Dad's 1996 cross country bike route, ACA routes, and our own. 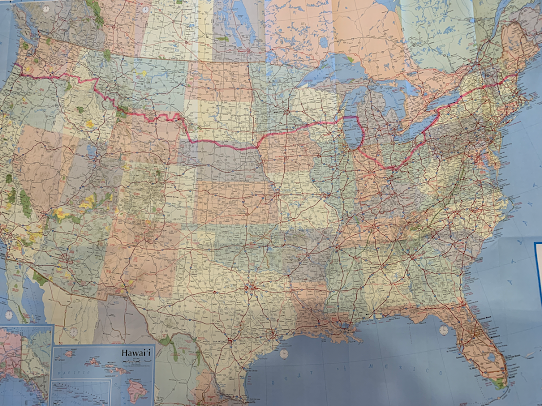 Starting in Fort Stevens we ride the Lewis and Clark trail along the Columbia River.   The route takes us through the city of Portland and into the Columbia River Gorge.  We leave Oregon and enter Washington passing through Walla Walla.

We ride into Idaho at Lewiston and we’ll see northern Idaho and we climb Lolo Pass on the way to Lolo Montana.  From Lolo we join the Transamerica route and head southeast to West Yellowstone, Yellowstone National Park and Wyoming.

Once in Wyoming we are following the ACA Parks, Peaks, and Prairies route.  After leaving Yellowstone we ride over the Bighorn Mountains via Powder River Pass and head across the prairie to Devils Tower.  In South Dakota we’ll follow the Mickelson Trail to see the sights in the Black Hills, including Mount Rushmore.  We continue southeast from the Black Hills toward Nebraska.

In Nebraska we follow a combination of the Cowboy Trail and Highway 20 all the way to Sioux City, Iowa.  From Sioux City we meander across northern Iowa and southern Minnesota to La Crosse, Wisconsin.

In Wisconsin we hope to enjoy some of the fantastic bike trails as we wind our way across to Manitowoc and take the ferry across Lake Michigan to Ludington, Michigan.  We’ll ride south along the west Michigan shoreline to La Port, Indiana then use the Indiana rails to trails system southeast to Dayton, Ohio and visit family.

We wanted to ride the Ontario coast in Canada, but that seems unlikely in 2021, so we next ride the Erie Canal rail to trails route from Dayton all the way to Pennsylvania.   Once in Pennsylvania, we will be on the ACA Northern Tier route until close to the end of this trip.   In Pennsylvania we stick to the Lake Erie shoreline until we reach New York and then on to Buffalo and Niagara Falls.

North of Buffalo we ride the Erie Canal Trail through Rochester, turning northeast toward the Adirondacks where we ride uphill to Old Forge and downhill to Ticonderoga then cross Lake Champlain into Vermont.

Vermont brings the Green Mountains via Middlebury Gap before crossing over into New Hampshire at Lebanon.   In New Hampshire we follow the Connecticut River north then turn east to cross the White Mountains at Kancamagus Pass.    Final stop in New Hampshire is Conway.

The final day of the trip we will be in southern Maine, finishing in Portland!   18 states we get to see from the seat of our bike!

The Route We Actually Took