We were concerned about the traffic and roads in the park so yesterday afternoon we stopped in at the local West Yellowstone bike shop Freeheel and Wheel to get some local advice. Leave early and there are rideable shoulders all the way to Canyon Village .  So today we were off and riding a few minutes before 6 am at 40 degrees. The west entrance gate to the park is just a couple hundred yards from the town so we were there at 6.  We had our choice of $20 per bike rider to enter or a $20 year long senior pass to all the parks in the US. A year long national park pass was purchased. There was little traffic and we had periods of no traffic and complete quite. First wildlife sighting were elk crossing the road heading to the Madison river which we have riding along since Ennis. We’ve never been on these roads.  At Madison junction we headed north on the Grand Loop road following the Gibbon river.  We stopped at a couple of sites on this stretch but spent the most time at Gibbon Falls. The final turn was onto Norris Canyon road. Shortly after making this turn, with no traffic around, Sherri says, “Do you see the Bison?!”  A huge Bison was about 20 feet from us lying down by the road !!  We kept going and sped up a bit! What a thrill!  Camping at Canyon Village where the park has biker camping, no reservations needed.  After setting up camp we are off on a hike to the canyon!
Sherri at Gibbon Falls

The Grand Canyon Of the Yellowstone 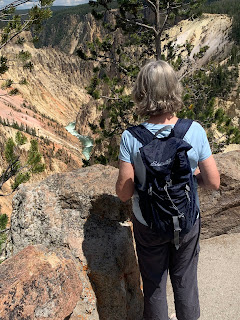